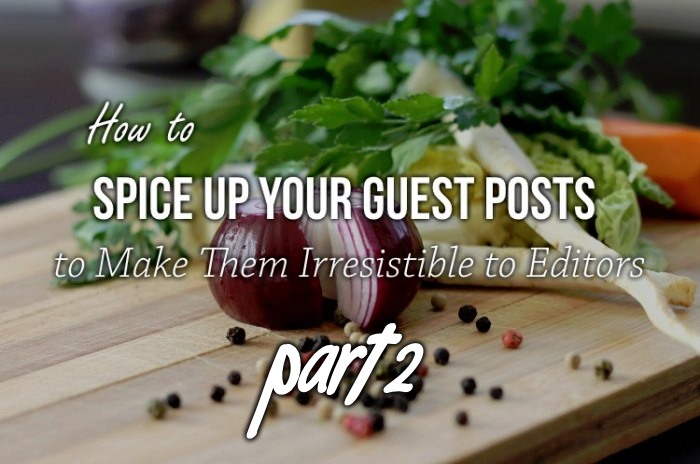 A week ago, we talked about how preparing a nice pitch and writing a quality post isn’t always enough to get it published as a guest post.

Although it is kind of sad from a writer’s perspective, it’s hardly surprising. In the age where there are thousands of articles circulating the web every day, with hundreds of writers trying to make a name for themselves, no wonder that blog editors get picky.

It’s pure math, actually. If the editor has a number of articles in front of them, and they all discuss roughly the same topic, they will always go with the one that requires the least of their work and also has a more pleasant appearance.

(That’s unless they’ve been sent an article by a famous writer/blogger, in which case they will always go with that piece, regardless of its appearance or even quality for that matter.)

Without further ado, let’s look into the topic of spicing up your guest posts again today. Therefore, here’s the second part of the list of things that you can do to stand out from the crowd and make your work more noticeable.

1. Use the right headers and typography elements

Whatever guest post you want to send, needs to look like it’s meant for the exact site you’re sending it to. The easiest way to mess this step up is to send an article that uses completely different typography.

For example, on some blogs, H2 headers are the standard for sub-headlines. For others, it’s H3 headers. However, you will also stumble upon some less popular sub-headline structures, like <strong> tags, <b> tags, a combination of <strong><em> tags, and so on.

Whatever the situation might be, you should go through your post and make sure that it uses the right typography structure. This is a relatively quick thing to do, but it can go a long way. There’s no better way to make the editor’s work easier than by allowing them to just copy and paste your article into their WordPress, immediately realizing that it just looks good right away.

So just do some sniffing around and check what the default typography on the site you’re targeting is. Focus on things like:

(Of course, in order to capitalize on this, make sure to send the HTML version of your article saved as a text file.)

Animated GIFs are much bigger than just a tool for obscure Tumblr blogs. GIFs are huge these days, and rightfully so because they are a superb tool to illustrate a simple and short process.

For example, if you’re working on a tutorial on how to do some specific thing in Photoshop, and it involves going through a couple of steps, you can do the explaining in one of three ways:

Although all of them do a good job at achieving the final goal, the first two have their flaws. Text descriptions + screenshots usually require you to write a big number of words in order to convey the message. You often also have to annotate the screenshots themselves.

YouTube videos, on the other hand, require audio. Maybe I’m a bit strict here, but my opinion is that a video without audio has no business being a video. Plus, embedding a video that’s just 2-3 seconds long does look a bit strange.

So my winner is animated GIFs.

Surprisingly, they are very easy to produce. All you need is a tool like LICEcap. It’s free and runs on Mac and Win.

Here’s an example of a GIF recorded with LICEcap; just me adding a featured image to this very post:

Those “click to tweet” (CTT) buttons have become really popular lately. Bloggers in virtually all niches have realized that it’s a great way to boost the average number of tweets they’re getting per article.

People just love to tweet, but even so, writing 140 characters of original text still takes too much time, so they’d much rather just click one button to have a pre-written tweet sent on their behalf.

Therefore, the simplest thing you can do in your guest post is pick a sentence or two that could possibly work well as a tweet, turn it into a tweet (custom Twitter link), and then put it in a visible place.

The things that usually work in CTT buttons:

Now about the technical stuff. Building a custom Twitter link is actually kind of simple. All you need to do is follow this structure:

4. [Tricky and optional] Spy on what plugins the blogger uses

As we all know, there are thousands of WordPress plugins out there. The official directory at WordPress.org lists over 33,000 of them at the time of writing.

A big number of those deliver some form of content-pimping-up functionality. For example, if we take a look at a plugin like Shortcodes Ultimate (great thing by the way, you should try it out), we can see it’s been downloaded almost one million times.

Now, there’s a big likelihood that some of the blogs you’re targeting are using it. And if they do, you can tweak your content in a way that utilizes some of the plugin’s functionality, thus making it even more attractive.

(Of course, Shortcodes Ultimate is just one example. The same goes for thousands of other plugins.)

Just to give you an example of what you can do on a Shortcodes-Ultimate-enabled blog with some simple tweaks, here’s a standard piece of text:

And here’s the same text after adding some simple shortcodes:

This is something that the editor is sure to notice once they copy and paste your article into their WordPress admin.

One final thing. Going back to the previous point – CTT buttons – there’s a plugin that handles those as well. It’s simply called Click To Tweet. Although to this day it’s been downloaded around 16,000 times, it’s actually popular on many blogs in the technology and business niches.

So if you stumble upon a blog that uses it, just place a shortcode like this somewhere in your post:

Every blogger likes to be positioned in the same context as someone they respect or consider an authority in their niche.

What this means in practice is that bloggers are keen to link to experts and talk about their work. This makes them seem more credible in the eyes of their audience. Not to mention that it usually also serves the audience directly by pointing them to quality information.

The way you can capitalize on this is quite simple. You can even do something as straightforward as mentioning some expert’s article and linking to it from your guest post.

One more added benefit working in your favor is that later on this gives the editor the possibility to contact the expert in question and let them know about the post.

Although I do admit that this isn’t a high-impact tactic, it does require very little effort on your part and can still give you some extra points on the article quality gauge.

That’s it for what I had to say about the topic, but maybe you have some ideas of your own that could look good on this list?

Guest Blogging Productivity 101: How to Build Your Action Timeline