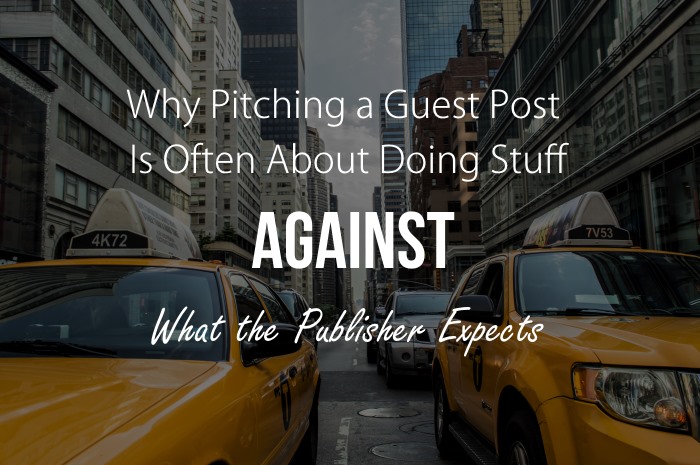 If you’re into data-driven marketing then you’re in luck because you will find myriads of interesting studies on the web that focus on virtually any online marketing method out there. And (guest) blogging isn’t an exception.

Quite recently, Jeff Bullas published a very interesting piece on his site. It contains 43 tips on how to create viral content campaigns. The data for the article comes from a survey where 500+ leading digital publishers were asked a number of outreach- and promotion-related questions.

One of the ideas behind it was to find out which outreach methods are preferred by publishers and which are absolutely hated on. So, in the end, we can learn to use a little bit more of the former, and a little bit less of the latter.

However, there’s something we should keep in mind when reading research like this.

The fact that someone prefers to be approached in a given way, doesn’t mean that this way is the most effective one for you to take.

Let me give you a more relatable example.

If you ask people if they prefer to see pop-ups on websites, probably close to 100 percent of them will say “no.” However, this doesn’t mean that pop-ups are not an extremely effective tool for convincing people to take certain action that you want them to take.

It is somewhat similar with outreach and pitching a guest post idea to someone.

Just a disclaimer. I’m not saying that the article on Jeff’s site is in any way wrong. Far from it. In fact, I’ve learned a ton of stuff reading it and I’m sure you will too. I just want to show that you should never consume raw data like this without interpreting it first.

However, this doesn’t mean that it’s better for you – the person who wants to get their pitch across – to send it in the morning. So proceed with caution, test this out for yourself and come up with your own daily schedule of outreach.

But what else is there? And should you really pay no attention to your recipient’s preferred way of being approached?

Of course not! Here are some interesting facts that we should keep in mind when pitching our ideas.

The steps to effective outreach

Experiment with sending a guest post right away vs. sending the pitch first.

In one of the previous posts here, I advocated for sending the guest post right away – without any prior contact. This method has always worked for me because it’s simply quicker and erases some steps from the whole process of getting a piece published.

However, it’s reported that 70 percent of publishers want to collaborate on content as opposed to getting something written up front. Now, this “collaborating” doesn’t mean that they want to participate in the writing process. They just want to see a list of possible topics and pick the one that resonates best.

So experiment with this. Try pitching multiple topics to the same site and see what impact this has on your overall results.

Use an email subject that stands out.

In a world where 40 percent of writers get pitched a minimum of 20 times per day, we have to do a lot to craft our message in a way that it stands out. Especially since it’s also reported that 85 percent of publishers open email based on the subject line alone.

So to get your email noticed, make sure that the subject line has these qualities:

About that last thing – generating curiosity. A general rule is not to be obvious. For example, if you say “guest post” in your subject line, you’re only asking for trouble. And it’s not that the phrase is bad in itself. The problem is that it’s being used by way too many spam guest bloggers out there. Many site owners just associate it with more spam coming their way.

Be creative. From my experience, the more outrageous the subject line is, the more effective it is.

Make sure your grammar is spot on!

There’s just one statistic I can mention here:

85 percent of writers will delete a pitch with spelling/grammar errors.

And the personalization doesn’t have to go far. All it takes is saying “Hi Name” at the beginning, and then commenting on some recent project of the person in one or two sentences. It’s that simple.

Setting all the information and all the knowledge aside, the best way to actually learn things is to begin testing different concepts yourself.

So, I just encourage you to give it a shot, and if you need help with your guest blogging campaigns, don’t hesitate to contact us here.

Hiring Someone to Guest Blog for You? Here’s How to Brief Them

How to Make Your Guest Posts More Visual