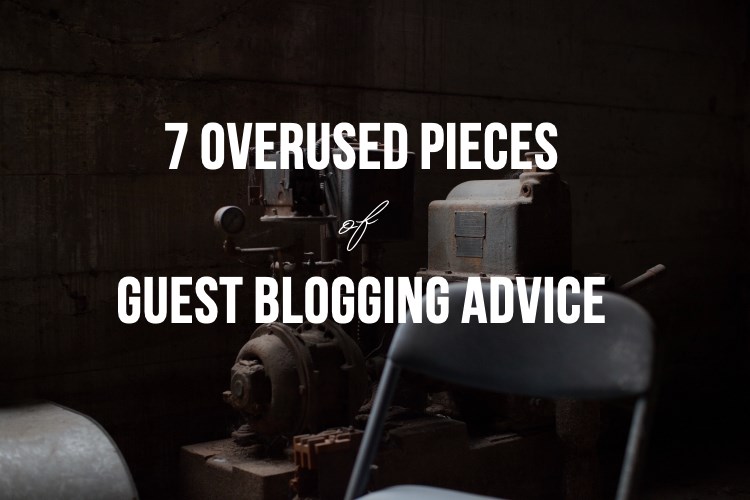 Let’s end the year with a bit of a rant … because why not, right?

Well, okay, what I have for you today isn’t an awfully aggressive rant, but it still does list some of the common annoying pieces of advice that bloggers and businesses are given when the topic of guest blogging gets mentioned.

Of course, the advice itself isn’t inherently bad in any way, but the key here is doing things in moderation, instead of diving head first into everything without thinking much.

Do you see anything wrong with the paragraph above?

Correct answer: Everything’s wrong with it.

Being unique is totally overrated.

I know that many bloggers (famous bloggers) have made a career out of being unique, but the fact is that you don’t need to do anything hugely unique in order to succeed in guest blogging.

For instance, look at the cup from which you’re drinking your coffee right now. Just the cup itself. What makes it unique? Does it have any interesting features? Or is it just a standard, normal, like-all-the-others type of a cup? Yet someone still makes money selling it. Those people are not unique. They are just there.

Showing up is half the battle.

Offering something sensible is the other half.

Being unique is only the icing on the cake.

So in your guest posts, make sure to tackle a specific issue instead of trying to be overly original and unique. People need solutions, not uniqueness.

This is somewhat similar to the previous point, but it goes a little deeper. The idea of thinking outside the box is great on paper, but in theory, it doesn’t always work out.

For instance, let’s have a look at the guest blogging space as a whole. There are hundreds of posts circulating around virtually every day. People write new posts, send them out, pitch new ideas, get them published, and so on.

Most of those people use either templates or very standardized methods of reaching out, pitching ideas, and even writing posts. There’s only a small group of people who do things outside the box. They are the ones with the most success, but let’s also remember that those are also the people who fail constantly. It’s simple, out of the box approaches don’t usually work – that’s their downside.

So instead of trying to be that one in a thousand guy/gal that has managed to pull off a creative guest blogging campaign, why not just use the techniques and tactics that have been tested and proven to work (to some extent) by the majority.

In other words, indeed try cooking up something outside the box, but at the same time, spend most of your guest blogging efforts doing what works and what has been tested by others.

Quite frankly, I don’t have a clue what this means right now.

I guess that the word tribe is something we first encountered in one of Seth Godin’s books. But Seth actually knows how to make it work and how to explain his ideas.

But then, bloggers decided to use the phrase when talking about various community/audience related things. The usage is somewhat similar to “engage.” Whenever there’s a question a blogger doesn’t feel like answering, they can simply say something like, “Hey man, just find your tribe and focus on it.”

Right now, the phrase is nothing more than a cliché (in 90 percent of the cases).

In short, this means that something is not as difficult as people think it is.

It’s just a catchphrase, nothing more. Bloggers like to use it probably because it sounds kind of cool and encourages us to take some action and figure things out on our own.

I don’t see any negative message standing behind this except that it’s just used more often than it should.

This is a term usually used in pitch emails. For example: “In exchange for this post, we’d expect one quality backlink from the article pointing to our product.”

Although using such an expression might sound like a good idea at first, it actually isn’t, and it only annoys blog editors and publishers.

The problem with it is that it makes the backlink seem like the only thing that you’re after as a guest blogger. Blog editors simply don’t enjoy such an attitude and they’d much rather work with someone whose purpose is something more than just a link (like engaging with the community, etc.).

In general, don’t mention anything about the fact that you want a backlink from your guest post. This really is obvious and doesn’t need to be mentioned.

“Link bait” is a type of content. To be more specific, it’s the type of content that readers will want to share with their followers either through links from their own sites or via social media (at least in theory).

The things that tend to work best as link bait is either highly SEO optimized content, big packages of resources, outrageous posts (where the author says something no one expects), humor, pictures and videos.

Some guest bloggers try to pursue the idea of pitching link baity kinds of content only. The idea is that blog editors are more likely to publish those as they present a better chance of getting shared and going viral. Therefore, there’s a big possible payoff for the blog editor to host such content.

The phrase is overused because it’s often a substitute for “quality content.” Apart from the fact that no one knows what this mysterious quality content is, not all valuable content will turn into link bait.

Now, the idea itself is great, but as usual, the execution can be tough, so I’d actually advise to focus on this kind of content only once in a while, and then spend the majority of your time pitching standard posts and tutorial advice.

And on top of all that, “link bait” is just a phrase with no soul. It turns your content into a tool for getting links.

What’s wrong with this level?

Why do we always need to be on the lookout for a method to get to the next one?

It seems that bloggers and businesses spend way too much time looking for some hack that would “skyrocket” their efforts and “take them to the next level.” Why not stay on this level for a bit? Milk it for a while, explore what’s possible, and only then try looking for hacks.

For instance, before you can start releasing 10 guest posts a week, you need to learn how to release one a month. You need to find out what works and what doesn’t in terms of pitching, writing, promoting your guest posts, and so on. Only then it’s a good idea to look for possible improvements that would take your efforts to the next level.

Stay on this level, there’s really nothing wrong about it.

What’s your take? Is there any other piece of guest blogging advice that’s hugely overused?