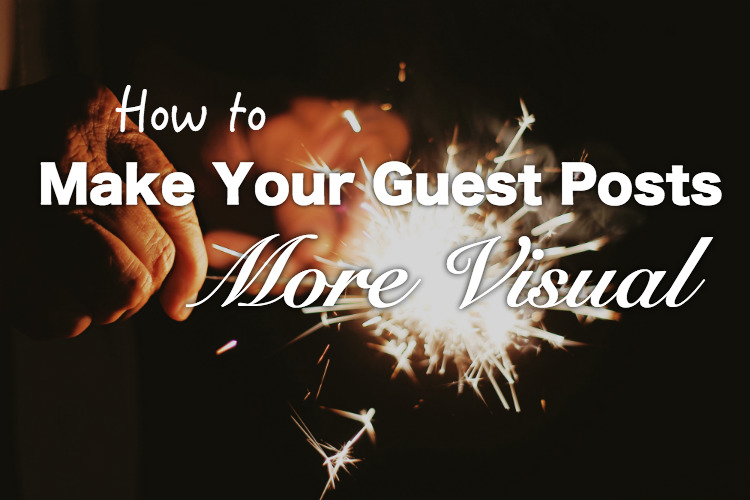 How to Make Your Guest Posts More Visual

One of the biggest challenges for us guest bloggers is standing out from the crowd and making our articles look more attractive than the average 400-word text-only piece.

Of course, having an exceptional writing style will get you noticed eventually, but this won’t happen until the person receiving your post decides to actually read it. We need something more immediate, something that can set our guest post apart right from the get-go when the blogger glances over it for the first time.

The trick I’ve been using for the past several months to achieve this is introducing some visual elements into my guest posts. And it’s been working brilliantly!

Here’s the thing, literally every day, the most popular websites get pitched on hundreds of articles by marketers who are just throwing stuff against the wall and waiting to see what sticks. Those articles all appear the same before the blogger gets to read them word by word. So if we want to get noticed amidst the clutter, working on some visuals turns out to be one of the simpler approaches to take.

The visuals I use are often very simple – for example, just a carefully crafted image that illustrates a given problem. On the other side of the spectrum, there are more advanced ones with custom typography and more complex elements. So in this guide, we will go through the possibilities and explain how to use them in your work.

1. The absolute must – intro image

In short, this is one image that will make the blogger think, “Oh, this doesn’t look like a standard spammy guest post that I keep getting hundreds of!”

The way I create those images is rather simple. I just take the headline of the article and put it on a CC or copyright free image using good looking fonts. (We’ll talk about software in a couple of minutes.)

You don’t have to go far for an example, just scroll up to see the intro image for this post.

Here are the guidelines you can choose to go by:

Here are some of my other intro images for inspiration:

These days, bloggers are much more interested in guest case studies than they are in guest posts. At first sight, actual real world data just seems more unique and valuable than a standard opinion post. What’s more, it’s actually said that 39 percent of publishers prefer to receive exclusive research.

In plain English, this means that if you have any stats to share, do it in a visual way.

Making them pop isn’t difficult either. You can go to the Online Chart Tool or Google Charts and create a graph or chart in minutes. Then you can embed it in any page or export it as an image.

Or, there’s an even easier hack you can take advantage of. If you’re writing guest posts in your own WordPress blog first (and exporting them later on), then you can use the WordPress Charts plugin. Create the data visualizations in it, then make a simple screenshot and attach it to your guest post as a standard image.

Depending on the length of your article, the sub-headlines could sometimes use some visualization as well. Now, the most coherent way of creating those is to make them thematically related or style-related. For example, take a look at the images The Verge places in one of their posts:

The Verge is known for their excellent content presentation, and their use of images is only one of many things we can learn from them. Notice how each image shares the same top layer using a single color intersecting the image diagonally.

Again, this is just one example, and the main idea is to make the images work together just like a football team all wearing the same outfits.

This is a more advanced technique, but it can often pay off if you want to land a placement on a popular niche site. Chances are that they don’t get many similar posts pitched to them, so standing out from the crowd shouldn’t be hard.

For example, to get a better idea of what I mean, please take a look at this:

It’s a page published on my own site. Even though the typography looks fairly complicated, it’s actually done via free Google Fonts, and can be easily replicated on any (and I do mean any) site. The best way to get started with this would be to create such a post in Word and then replicate the typography with an HTML 5 -compatible structure. Finally, let the blogger you’re pitching know that you will handle everything on your end, so they don’t have to worry about any compatibility issues.

Let’s stick with the advanced techniques and discuss how you can build a completely tailor-made visual guest post. Please take a look at the following:

The entire structure was built with clean HTML. Even though it doesn’t look much like a blog post at all, it’s still compatible with every WordPress site. I first built it in the text editor on my own WordPress blog and then exported it to a standard text file and sent it to Be a Freelance Blogger.

Getting this sort of post approved really makes you stand out and sets you apart from every other guest blogger who has managed to get their work published on the same site. The only downside is that it takes three times more effort on the average than writing a standard article. So in the end, I guess no technique is perfect.

What tools to use

Apart from the ones I already mentioned above, here are some of the other tools I use frequently:

I really encourage you to either try out one of the tactics described here yourself, or to send them to the person handling your guest blogging campaigns. From my experience, I can tell you that if you’re having difficulties getting featured on a certain site, making your posts more visual can be this one final nudge to get you through the door.

Passion – The Most Overrated Element in Successful Guest Blogging