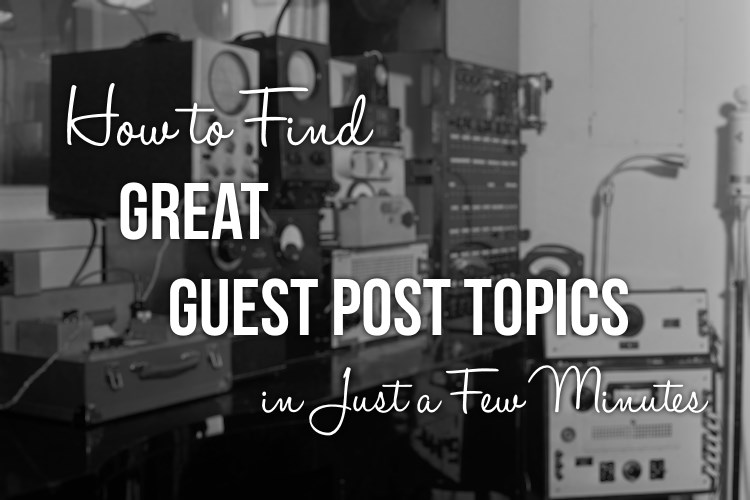 One particularly tough part of the job when you’re guest blogging is that a seemingly good blog post topic isn’t necessarily a good guest post topic as well.

There’s a number of factors that come into play here. Chief of which is the fact that a good guest post should be optimized to resonate with its target blog’s audience, as well as be connected with your own site’s angle and offerings.

What this comes down to is that if you want to come up with a truly great guest post topic, it will require more than just a disconnected brainstorming session that’s only happening in your brain.

The key to success here is research.

There is a way to speed things up, though (four of them, actually).

1. Look for the most popular content on the site itself

A great starting point is researching the content that is already popular on the site that you want to pitch. You can look around the site itself and try finding a “most popular” widget or something similar.

The reasoning behind this is that this content has become popular for a reason, and that you can piggy back off this popularity by writing a post that’s somewhat similar.

Of course, you can’t go crazy on the “similar” part. The content still has to be original and valuable, but you can very well take a handful of basic ideas from it.

All those insights can be invaluable when coming up with your guest post topic. Also, this will make your chances at impressing the editor better. If you pitch them something really tailor-made for their site, they will pay attention.

The main idea here is similar – we’re looking for content that’s already popular on the site, so we can emulate it and craft something that’s in some way similar.

What’s different about this tactic, however, is how it’s done.

In the previous approach, we were looking for posts listed by the blog editor himself/herself. But now, we’re going to be looking through QuickSprout. We’re doing this to identify the posts that are the most popular on social media. Looking for this sort of content gives us another layer of research-depth, so to speak.

Here’s the thing; when a blogger displays a “most popular” block on their site, you basically don’t know what the reasoning is for placing certain posts on that list. It may be because of the traffic that the post is receiving, it may be the comments, or it may indeed be social media popularity, or some combination of all these factors.

However, when we’re doing our own sniffing around, we can easily find the posts that have earned the highest social proof and have resonated with people the most – that’s the power of social media.

So, to do this, just go to the homepage of QuickSprout, input the blog address you want to check and hit the enter key. On the next screen, click the social media analysis tab. After a while, you will get a nice breakdown of the most popular content.

What to do with this from there? Again, craft a guest post topic that’s somewhat similar.

I was a bit skeptical when I first stumbled upon this tool.

It’s a blog post title generator. All you need to do is input your high-level topic (or niche), and the tool will spit out some headline ideas.

In all honesty, I’m quite surprised at how interesting those generated headlines are. The people who built this tool surely spent a lot of time coming up with just the right headline templates that can be used for various high-level topics. Or maybe there’s a more advanced mechanism/algorithm inside … I don’t know.

Either way, this tool is a breath of fresh air if you’re having writer’s block and can’t seem to come up with anything interesting yourself.

4. Ask the editor what tends to work well on their site

At first, this may sound like something too obvious and too simple to ever be effective in the modern guest blogging space.

After all, popular blogs receive a ton of pitches so they don’t have time to answer your questions and help you work on the article, right?

I’m actually finding that editors are more than willing to help you out and give you some guidance above their publicly available guest blogging guidelines.

In fact, asking the editor openly, “Is there any particular type of post/topic that usually works best on your blog?” can gain you a handful of things:

To be honest, I’d actually name this the most effective method on this whole list. In other words, start here whenever possible, and especially if you already worked with the editor in the past.

At the end of the day, coming up with an interesting topic or headline is just the starting point. While your topics need to be relevant and attractive, you’re still just throwing a number of ideas against the wall and seeing what sticks. However, once a topic gets a green light, don’t rush it. Really work on it to build something … epic.

8 Habits of Blog Editors That Will Drive You Crazy!