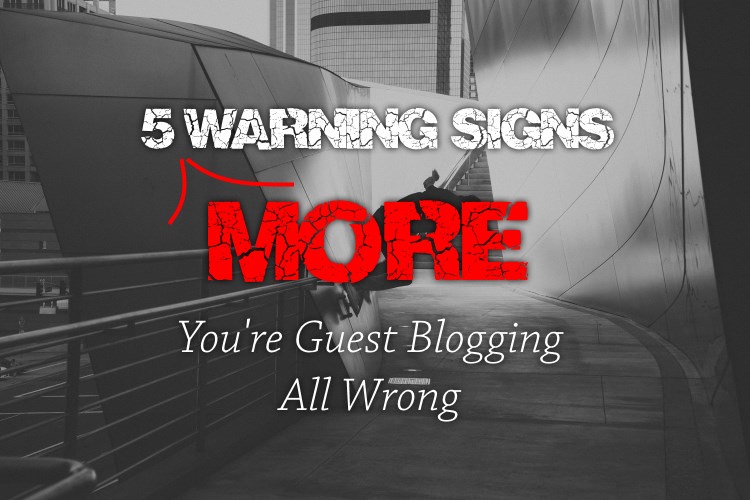 We’ve covered a lot of ground in the first part of this post, so I figured we should continue with the topic to get the most complete image of the problem possible.

Last time, we talked about things like heavily SEOd links, nofollow links, lack of calls to action, not linking to a landing page, focusing too much on the numbers of words. Those were all technical issues, so to speak. Issues that although are serious in nature, can be fixed easily with some dedicated actions.

So today, let’s focus on mistakes that go a little broader and mostly focus on the bigger picture of guest blogging.

6. You’re willing to have your posts published anywhere

Let’s start with one of the most serious issues out there. Even though we all know this, it’s worth emphasizing that not all blogs are created equal.

And what’s particularly bad about this is that a poorly placed guest post will not only not bring you results, but it can also hurt your SEO.

Google simply doesn’t see all websites as being valuable to the wide online audience overall, so if they see a link to your site from any of those bad-neighborhood sites, you can get some of their bad rep transferred onto you. And you don’t want that.

What’s even more challenging is that sometimes it’s difficult to identify those low quality sites at first sight. Here are some of the things that I do:

7. You’re doing too little of it (guest blogging)

I know that this might sound obvious at first, but it needs to be said.

Guest blogging is an awesome marketing and promotion method, but it’s only as effective as it is regular.

Having just one or two guest posts published every three to four months won’t give you much results in terms of traffic or recognition.

To see anything worthwhile coming your way, you just need to devote significant resources to be able to do guest blogging on a regular basis. This doesn’t have to be a huge investment, but it needs to be big enough to give guest blogging its place among your other marketing methods.

I would even go as far as saying that if you just want to test things out with two or three guest posts then don’t bother. Wait a while. Give it a go once you’re able to invest in at least two posts a month for three months regularly.

8. You don’t want to have multiple posts on the same site

Not that long ago, when guest blogging was regarded only as an SEO method, having multiple posts featured on the same site was worthless. I mean, why would you? Google only counts the first link they find, right?

Well, what Google is doing nowadays I’m not sure. But I am sure that having multiple posts on the same site gives you X-times more exposure than just a single post.

And the best way to go about this is running a series – a sequence of thematically related posts being released on the same site every X days.

Here’s why it works:

9. You’re working with self-promotional articles only

The main difference is that with an ad, you’re just talking about how great your product is and why people would want to get it.

With guest blogging, you take a while to talk about a certain problem, why it’s important and what the possible solutions are. And in it, one of the solutions can very well be your product/service.

However, if it’s the only solution, the article appears too self-promotional and can be easily declined on that basis. And even if it’s not declined, the readers will see through it in seconds, giving you no love for it (not even mentioning clicks or traffic).

10. You’re not responding to comments

Guest blogging is not a post-it-and-forget-it kind of tactic. In fact, it’s as far from it as possible. Once you have a guest post spot landed, it’s a great opportunity to reach out to the people interacting with it, and strike a conversation answering their questions.

Whenever someone asks a question, make sure to do whatever you can to answer it. This will be noticed by other commenters and by the rest of the audience in general. At the end of the day, this will likely improve your click through and the results you can get from each individual guest post.

I really hope we’re done with this topic! Not because I don’t enjoy writing about it, but because I hope that we’ve covered all of the most deadly mistakes in guest blogging.

So, just to finish up, here’s the second part of the checklist to not doing guest blogging all wrong:

And just to keep the advice complete, here’s the first part again.